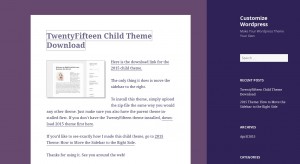 When I first created my Twenty Fifteen Child Theme, I had a slight problem- the text in the sidebar would jump left and right whenever I scrolled the page. I looked at it in different browsers, and as far as I could tell it only did that with Firefox on a large monitor. Of course, a lot of people use Firefox with large monitors these days, including me, so a fix was in order. To really fix it, I would have to edit the js code (and I’m not very good at that). But I did find a simple solution that worked like a champ. All I did was have less information in the sidebar. If there is no more text there (that you’d have to scroll to see) it doesn’t jump. Simple. I like simple.

I like the way the 2015 Theme sidebar holds its place when you scroll. There is another guy who made a 2015 child theme, but with his theme the sidebar scrolls away along with the page, unlike the original Twenty Fifteen Theme. I really wanted to use that theme for a certain site, but with the sidebar moving, that was a problem for me. If you’d rather have the sidebar on the right, and you like it to scroll down along with the page (maybe you have a lot of stuff in your sidebar), try this 2015 child theme.

But if you’d rather have the sidebar stationary, use my link at the top.